Art in the Clark, the program of bringing the art works of local artists and students into Clark Memorial Library, is the legacy of weaver and fiber artist Mary Liggit who joined as one of the ‘tenacious ten’ to help get CML reopened. 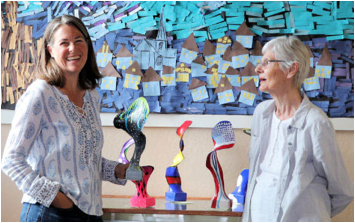 Mary Alice (Nelson) Liggit, 90, departed peacefully on July 14, 2019. She was born in Nebraska and grew up on a farm just outside of Ashland, Nebraska, earning her teaching certificate and teaching in a one-room schoolhouse. Soon after marrying Joseph Liggit, who pre-deceased her in 2000, they started a family, and made their way to the Southwest, first taking up residence in New Mexico and ultimately settling in Flagstaff, Arizona. In addition to raising three girls, she found time to advance her learning by earning a Bachelor of Arts degree from New Mexico State University and her Master’s degree from Northern Arizona University. As time went on, and family obligations allowed, she began embracing her creative side, with active memberships, and serving in various leadership positions, with the Intermountain Weavers Conference Board, Handweavers Guild of America, and the Verde Valley Weavers and Spinners Guild, culminating with being recognized as a renowned weaver and fiber artist in her own right. Additionally, as a life-long giver and servant of the community, Mary devoted countless time volunteering at the Clemenceau Museum as the Exhibit’s Chairperson for over 20 years. Mary developed and managed CML’s Art in the Clark program. When CML was slated for closure, Mary along with her husband of nearly ten years Bill Scales and the other ‘tenacious ten,’ helped form the Friends of the Clark Memorial Library, which worked with the Yavapai County Free Library District and the Town of Clarkdale to get CML reopened.

To check out what is currently on display as well as upcoming exhibits go to the Art in the Clark page for this season’s schedule and sample images and then visit CML to admire the craft and creativity of local artists in person.

Alice Pulido, Manager of the Dollar General at 89-A and Lisa St., has donated decorations to CML for several holidays. Alice urges store patrons to ‘round up’ their purchases to benefit Dollar General’s literacy fund. Alice’s support of CML resulted in a $2,000 donation to the Friends of CML to support literacy programs. Library lovers wishing to return the good will can thank Alice by going to the DGCustomerFirst.com website after making a purchase at the Clarkdale Dollar General store, entering the code numbers on their receipt, and clicking “highly satisfied.” 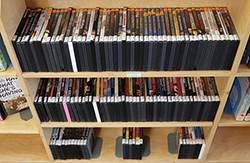 Clark Memorial Library’s financial support from the Friends of CML is apparent in the abundant new videos and books on the “new items” shelves in front of the check-out counter. More of both arrive regularly. Come on in and check them out!

Friends of CML have provided 6 new padded chairs in the meeting room, for a total of 10. Groups seeking a pleasant place to hold meetings can reserve the meeting room by talking to a Library Coordinator.

Newspapers and magazines to peruse in-library
CML’s antique, solid oak magazine rack was located and restored to the library. You’ll now find it filled with current issues of The Wall Street Journal, The Arizona Republic, and The Verde Independent, as well as National Geographic’s History magazine, The Atlantic, AARP, Smithsonian, Mother Jones, and WebMD, plus various issues of magazines donors thought might be of interest, such as Arizona Highways, Country Gardens, The New Yorker, and Sunset Magazine. 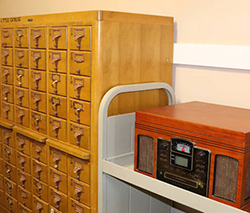 Seed bank and crafts materials dispensary?
The Clarkdale Historical Society returned this beautiful antique card catalog to CML, where it belongs. It could become Clarkdale’s own seed bank if a volunteer horticulturist steps up to stock it with seeds patrons can check out, plant, harvest, and share. Could you be the one? Talk to one of the Library Coordinators.

Notary Public
Patrons can now have documents notarized without charge.

New books and DVD/Blu-ray videos
A growing selection, with the most recent arrivals on the shelves in front of the check-out counter. Tell the Library Coordinator if there is something missing you would like to see.

Art in the Clark

Select from more than 1.3 million items.
Place a hold on your choices.
Pick them up at CML…